My Child Throws Temper Tantrums
What to do Doc?

In my clinic, I'm frequently asked the solution for handling a child with temper tantrums. Unfortunately, the problem comes to me only after the aggressive behavior in the child is already become part of her social expression. 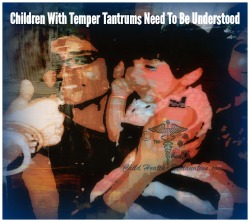 When a child misbehaves, she is probably trying to draw your attention to something that has escaped your concern for sometime.

Through her aggressive behavior, a helpless could be just asking for some more attention, an outlet for her creativity, some form of care, affection, security or liberty.

And Temper tantrums are children's expression to defy the authority with all their strength.

Second year onwards children begin to exert their need for individuality.
For example: If they are abruptly pulled out from what they are engrossed in, the result will be anything from crying to aggressive behavior. Parent's scolding and threats make them burst into tears of helplessness.

Instead, if parent pretends to share the child's interest at that moment, and then playfully lures the child to what she would want her to do then the compliance received would me much more.

Children are expected to adjust their behavior almost instantly to each person's expectations that are influenced by numerous individual and situational inconsistencies.

Inconsistency of behavioral expectations and social approval makes social adjustment and emotional regulation the most difficult part of childhood development.

Fear of being judged unfavourably by significant others, including parents of course, lies at the core of children's social anxiety. And temper tantrums are the outward expression of their mounting distress.

Social and emotional state of the family

During infancy, toddler stage and preschool years (below 6), the main influence on the child is that of the family.

Disturbed emotional state of the family due to any cause can disturb children's mood as well. Children are unable to express their apprehension due to their immature communicative capabilities.

Distress in children is therefore often expressed as aggressive behavior. Unfortunately for children, instead of being understood they are scolded and punished, which worsens their behavior; and a viscous cycle is set in.

Children internalize distress of their parents

Studies show that the children whose fathers underwent emotional upheaval when they were yet in their mothers womb presented with excessive crying and colic during infancy; and temper tantrums during toddler- preschool years.

No parent can ever look happy while scolding a child, and children perceive scolding as distress caused to the parent. They hold themselves responsible for the parent’s overall emotional state.

Instead of getting a solution they feel they have aggravated the stress in the environment and get withdrawn: Healthy parent-child bonding is jeopardized for entire childhood development.

No, punishment is also Not the answer.
Children perceive punishment as implementation of authority; and their temper tantrum is an expression of defiance.

Punishing a child with aggressive behavior disorder is only going to aggravate the problem.

Unfortunately terms like training, educating, disciplining and controlling are too often used in upbringing of children. I use the word upbringing instead of parenting, because children get controlled by every adult who passes their way.

What is required for healthy psychosocial development of children is understanding, affection, care with love, and setting examples by following that is being preached. Children learn from what they observe rather than what they are preached.

Other causes of temper tantrum in children

Though child psychology plays a major role during the formative years of childhood, it can certainly not be the only factor.

Some more causes of temper tantrums during early childhood: