Effects of Divorce on Children’s Behavior

Effects of divorce on children’s behavioural and emotional development are generally overlooked by the couple seeking legal separation. 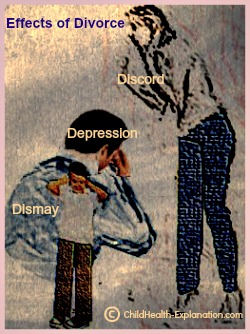 Injured emotions disrupt their parenting capacity much before the divorce comes in.

Being themselves depressed and irritable, they are unable to provide healthy interactive environment, which is so very necessary for optimal child growth.

On an average 50% of the marriages are plagued by marital disharmony that eventually end in divorce. Meaning thereby that about 50% of children population suffer from the ill effects of divorce. The degree of discord between parents directly correlates with the degree of psycho-emotional damage inflicted on their children.

Though both parents fight for the custody of their children, they fail to recognize the traumatic effects of divorce on children, whose home gets demolished, beliefs are blemished and bearings are bruised.

Changes in lifestyle and family structure that follow are mingled with anguish, anxiety and depression. Without any explanation offered to children, all that stood for their self-concept and that they loved gets torn down. The impact of the damage done dawns on parents only after the divorce proceedings have been implemented.

Living in a family full of anger, acrimony and accusation was bad enough, but worse was brought in with divorce. During the first year after divorce parents begin to see the ruins of their family.

The split that was so intensely sought for neither brought happiness nor mental peace. Children’s distress now becomes apparent. Emotional turmoil and guilt feeling haunt both, the parents and the children.

Effects of divorce on children

Continued conflict between parents even after the divorce deepens psychological impact on children. Loss of contact with the noncustodial parent aggravates their distress.

Children need both the parents. A single parent, however efficient and well meaning, can never satisfy all their emotional needs.

Children often hold themselves responsible for their parents’ insecure relationship. They hope that separation will be only temporary. They try in their little ways to effect reunion but fail miserably.

They do not dare to verbalize any opinion on each parent’s faulty attitude. Instead they cling, remain withdrawn or even play a “sick role” absolutely unwittingly; all in hope of peace.

Divorce implementation leaves children powerless. They have no control over the way their home and family are suddenly manipulated.

Crying, temper tantrums are often seen among infants and toddlers, while some sulk in silence.

To say the least, all are sad and subdued; disinterested in food, friends, fun and lessons. They begin to defy disciplining. They spend sleepless nights. Fatigue and regression of cognitive skills lead to attention deficit and disinterest in all school activities; social, sports and educational.

In the hope to rejuvenate family atmosphere, heal the rejection and to fill the lacuna of loneliness parents bring in step-parents. It shatters children’s hope of reunion. Presence of step parent makes the rejection complete and the loss permanent.

Emotionally devastated and socially detached, children hold their most favourite toy/article and step out in the hostile unknown world to reach the missing parent. They risk being kidnapped and abused. Many end up becoming street children. Tween and teenagers get aggressive and drift towards addictions, risky behaviours and frivolous relationships.

The effects of divorce last for years

Human brain has amazing innate ability to accommodate. Therefore, by end of second year the major emotional turmoil settles down, but the psychological impact is never fully overcome

5 years after parents’ divorce, 67% of the affected children yet find it difficult to accept the effects of divorce on their life and family. However, over a decade almost 50% of them manage a satisfactory psychosocial development and academic success.

Nevertheless, moderate long-term negative impact on psycho-emotional health is seen throughout their adulthood. Some of them even evade lasting intimate relationships for fear of repeating their parents’ experience.

The degree of psychological morbidity, after controlling for financial status changes and other predisposing factors that existed before the divorce, is noted to be directly proportional to the intensity of conflict between the parents before and after the divorce.

Regardless of personal differences and custodial status, both parents need to minimize conflict and allow children the liberty to interact freely with both the parents.  A continued healthy relationship with both biological parents minimizes the ill effects of divorce on involved children.

Grandparents' parenting helps heal the injurious effects of divorce. Positive support from siblings and other relatives further helps endure the crisis. Moreover, in time of need avail trained mediators to avoid unpleasant disputes. Continued discord will only lead children into foster care – away from both the parents, grandparents, siblings and all.