Temperament is a child's innate manner of thinking, behaving, and reacting. The concept of behavioral traits helps parents understand and accept the characteristics of their children.

Recognizing these inherent behavioral traits in a child is as important as positive reinforcement and loving the child. It smoothens child parenting and personality development of children. 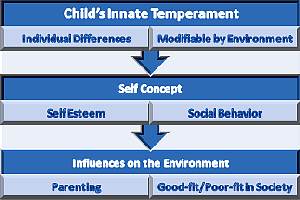 Parents who understand their children's genetically determined nature can help them through emotional turmoil of childhood development.

They can mold their children's social behavior and help them build positive self-concept and high self-esteem.

Children see understanding parents as role models and not as intruders who just dictate terms. They see themselves on the same platform as their parents and visualize parental interaction as the reflection of their own thoughts. Consequently, children learn from the examples set by the parents.

For centuries, nurture theory of social behavior had gained importance, while its inherent nature was shelved.

Nevertheless, it is a common observation that some children grow in to be socially well adjusted adults irrespective of the type of nurturing they receive, while the others, in spite of the best of nurturing, continue to remain maladjusted.

Estimates of inheritance suggest that genetic differences account for approximately 20-60 percent of the variability of temperament within the population.

Effects of social and environmental influences

Predictability of biological functions, such as appetite, sleep and toileting.

Level of response energy: Child may react strongly, get upset dramatically or may just become quiet.

Required intensity to evoke a detectable response by sensory stimulation, such as sound, taste, touch and temperature changes.

Length of time child continues an activity in the face of obstacles.

Children with low energy and high adjustability are very easy to manage.

Low energy with low adaptability: Children who are slow to warm up.

High energy and slow adjusting: Known as the Difficult Child

Difficult child often causes tremendous maternal stress that may jeopardize the mother's parenting capacity due to the resultant maternal depression.

Approximately 35 percent of children don’t clearly fit into any of the major temperament categories, but show a mixture of traits.