Diabetes during pregnancy alters fetal development in several ways. Consequently the well being of IDM at birth is jeopardized. Hyperglycemia impedes fetal development, and along with hyperinsulinemia it leads to macrosomia, polycythemia, jaundice, hypoxia, anemia and birth defects; all that threaten newborn IDM's well being. 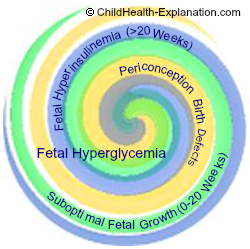 Optimal control of diabetes during pregnancy can minimize the risk for IDM, the infant of diabetic mother. 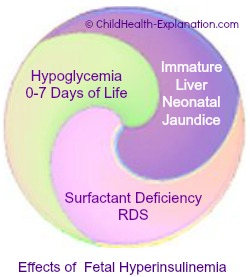 Insulin does not cross placenta. Fetal pancreas produce their own insulin. Suboptimal control of diabetes during pregnancy exposes the baby to high glucose levels, which program fetal pancreas to produce large quantity of insulin.

Insulin, even in normal levels, inhibits normal maturation effect of glucocorticoids on fetal organs.
Hyrerinsulinemia takes it up to abnormal levels, particularly that for lungs and liver functions.

Hypoglycemia, dangerously low blood sugar levels, during first 10 days of life is attributed to abrupt interruption of glucose supply from the mother at birth, whereas insulin levels continue to remain high for the reasons explained. It takes 5-10 days for newborn IDMs’ pancreas to get reprogrammed to normal insulin requirements. 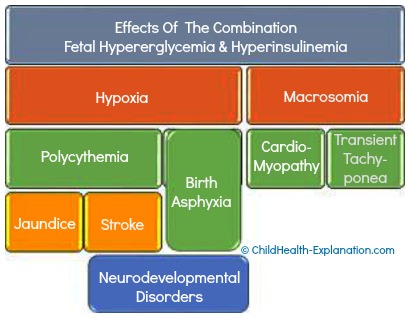 High glucose levels in mother flood the fetus with glucose far beyond its needs.  Hyperinsulinemia tries its best to combat hyperglycemia. Excess glucose is converted into fat. The baby becomes large for gestational age, but is deprived of adequate oxygen supply.

For more click on Macrosomia: Large for gestational age IDM

Fetal circulation is known for its low oxygen saturation.
Hyperglycemia and hyperinsulinemia increase fetal oxygen consumption by about 30%, but the placenta is not capable of increasing the oxygen supply to the fetus to such great extent. Microvascular disease of long standing diabetes in the mother further impedes fetal oxygen supply 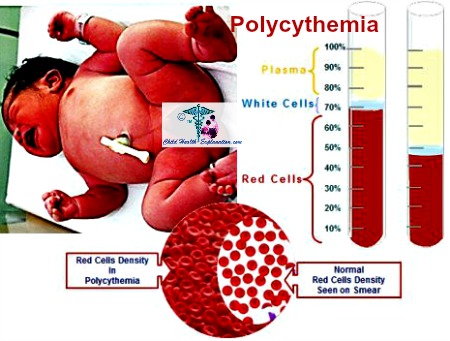 Fetal tissue hypoxia generates signals that step up RBC formation.
The fetal red blood cells are increased by about 30%,
but overworked erythropoiesis is unable to keep up with the quality of RBCs production: And Polycythemia gets evolved. The severity of polycythemia is directly proportional to the severity of glucose metabolism derangement of maternal diabetes during pregnancy. To download the managment protocol of polycythemia in new born babies click here.

Proportionately iron need also increases; 3.46 mg. iron is required for each gram of hemoglobin made. It also plays a crucial role in cell growth and development of neurotransmitters. Iron deficiency during fetal and neonatal period compromises brain growth, causes myopathies and results in neurodevelopment disorders.

Studies show that 65% of newborn IDM have poor iron stores.
This is because, the placenta affected by high blood sugar levels is able to increase potential iron transport only by 11%. The huge deficit remains. Fetal iron stores in liver get depleted. The system supports rising red cell mass at the cost of organ development. Poor oxygen saturation during fetal development and childbirth further jeopardize developing nervous system.