Teenage development is a phase of rapid physical growth that is only second to the rate of growth seen during infancy.

The rapid growth phase of adolescence lasts for 4-5 years, when on an average: Girls gain 8.3 cm. per year and boys gain about 9.5 cm. per year. 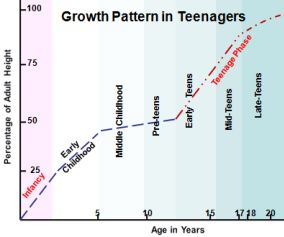 It is the adolescence ambivalence that
causes emotional stress and conflicts
both in teenagers and their parents.
But it also

is an integral part of teens psycho-social development.

Why are teenagers ambivalent?

Adolescents need a lot of positive re-enforcement rather than criticism for their short comings. This helps build their self-esteem and prevents them from becoming perfectionist, absolutist and intolerant of opposing views.

Emotional stress caused due to various challenges and expectations during teens can even precipitate stuttering, teenage depression or other psychiatric disturbances.

They usually compare their looks and body structure with the media models, who all are projected to be very thin females or muscular males – Not really a normal natural phenomenon of teenage development.

Although it is hard to say, what should be the healthy weight for a particular individual, there are some methods to predicted adult height and
height to weight growth charts.

Healthy body image is important for building positive self-esteem during adolescence. BMI evaluation can give more realistic picture of fatness in an individual, but each method has its limitation.

The anxiousness about the body image can lead to eating disorders, especially in teenage girls. It is therefore also important to cultivate healthy eating food habits right from pre-teen years.

Adolescents in early teens psychologically leave behind their childhood and begin inspecting the adult world that lies ahead; the consequences being:

Both, the teenagers and the parents go through a particularly stressful stage during the teenage development. Nevertheless, they should be able to finally emerge as happy well adjusted individuals.

“Youths are the strength of our future. Help them through adolescent development rather than humble them for their ambivalence at every turn of teenage development: A phase that is full of turmoils due to naturally changing hormones, body shape, and social needs.”

"Share your teenage turmoils:" Many families may benefit from your experiences and tips.

Have questions?
Post them to the Expert and get your answers for Free

Back To
The Teenagers

HPV Vaccine for Boys and Girls

The Morning After Pill