Is Jitteriness in Newborn Babies Abnormal?

Jitteriness refers to tremors in newborns. It is the representation of an exaggerated startle response. Tremulousness is often confused for seizures (also known as convulsion and fits), which naturally unnerves the parents.

It is the most common involuntary movement seen in infants, which disappears completely as they mature. The neuro-development of the babies with No other overt neurological sign but tremulousness is generally good, especially when their is no history of complications during pregnancy, or immediately before and after birth.

Tremors in newborn are usually not abnormal.


Is medical consultation indicated for tremulousness?

Persistent and/or exaggerated jitteriness demands professional evaluation. Sometimes it could be the manifestation of a variety of neonatal problems:

Newborn jitteriness can often be mistaken for seizures in newborns or vice versa. Read a relevant post: Strange behavior of 10 Weeks Old infant, & the related comments.

Wish to Know More
on
The Mimics of Fits in Early Infancy?
Download Now
$ 4.38 Only

Seizures are recurrent sudden abnormal involuntary movements, commonly known as fits or convulsions. There are some distinct differences between neonatal seizures and jitteriness, which are tabulated below. 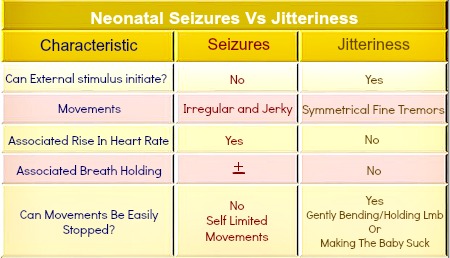 Seizures are also known as fits or convulsions.
Seizures during early infancy are often subtle and so easy to miss. 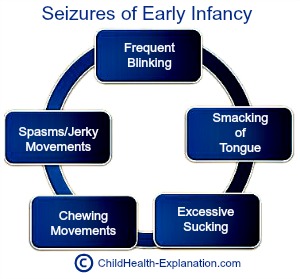 b.) Intraventricular hemorrhage: A kind of bleeding in the brain 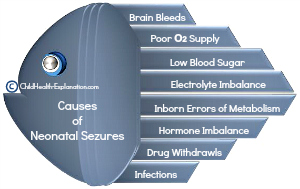 Confused? You may find the answer here:

Want More On The Mimics of Fits in Early Infancy?

Back To
The Neonates

Liked what you just read?
Pay It Forward!