Gastric Outlet Obstruction
A Common Cause of Vomiting in Newborns

The most common cause of gastric outlet obstruction in newborns is Pylorospasm, the repeated or persistent contraction of pylorus muscles. Vomiting becomes inevitable if the contents of the stomach are unable to find their way through the pylorus, the furthest part of the stomach that opens in intestine immediately beyond the stomach, the duodenum. 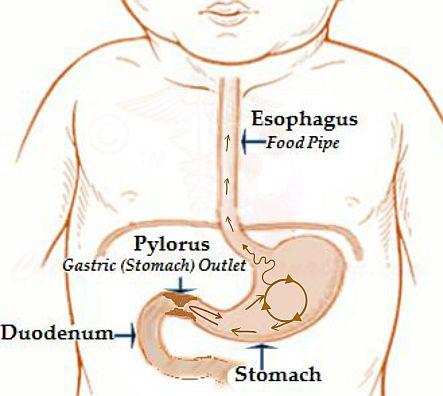 Due to Gastric Outlet Obstruction, the Stomach Contents Are Unable to Find Their Way Through the Pylorus.
Both Genetic and Environmental Factors Play Role in Its Development - Initially, Pylorospasm Which over Few Weeks Progresses to Pyloric Stenosis.

It is believed that at initial stages gastric outlet obstruction in the newborn period is only repeated spasms of the pyloric sphincter, which over 2-8 weeks progresses into the actual pyloric stenosis. Clinical presentation, however, remains the same, frequent mucoid vomiting that comes up suddenly and forcefully without preceding nausea. Regurgitation and difficulty in feeding coexist in some neonates.

The precise cause of outflow obstruction of the stomach in newborns is not known, but there are several theories:

Babies of mothers who are under stress during the second half of the pregnancy have a higher risk of developing obstruction at the outlet of the stomach.

The surrounding network of nerves is compromised, both developmentally and functionally.

Typically the first born boy is most frequently affected. Newborn girls are less often affected, female to male ratio being 1:4. On the other hand, offspring of an affected mother are at 4 times higher risk of getting the disorder than the offspring of an affected father. However, the frequency of disease manifestation in the next generation does not behave like a typical dominant mode of genetic disorder transmission.

It is an inherited disorder characterized by enlargement and dysfunction of the adrenal glands. The affected infants suffer from improper production of mineralocorticoids, glucocorticoids or sex hormones, as a consequence of deficiency or absence of a single enzyme.

Prostaglandin therapy is essential for the survival of the babies born with a severe form of cyanotic heart disease. Prolonged use of prostaglandin is noted to cause reactive enlargement of the smooth muscle and mucus-producing cells of the stomach, which along with associated tissue congestion narrows the passage through the pylorus. This picture could also occur without any identifiable cause.

Over Activity of the Pyloric Muscle

The effect of overactive pyloric muscle is same as that of body building exercises; the muscle increases in size. As a result, the functional narrowing now becomes a physical obstruction to the passage of food out of the stomach.

The factors that lead to prolonged muscle contractions are as follows:

Increased secretion of acid in the stomach commonly occurs in the period immediately after birth. It helps to increase the secretion of gut hormones; secretin and cholecystokinin. Both these hormones aggravate pyloric muscle contractions, and thereby pyloric hypertrophy.

Gastrin facilitates the breakdown of the food in the stomach. It stimulates gastric acid secretion and the contractions of stomach muscles such that the food is churned together with the digestive enzymes and liquefied, thereby ease stomach emptying.

The increased effect of Gastrin could either be due to inherent sensitivity to the hormone or excessive production of the hormone.

Any gastric irritant including milk allergy

Treatment offered points towards the cause

The role of prolonged and frequent muscle contractions in the development of pyloric stenosis is further emphasized by the treatment commonly offered. The management of the disease, both medical and surgical, is directed towards disabling the contractibility of the pyloric muscle, which then gradually shrinks to normal size.

Ultrasound Is the Key to Diagnosis

A plain x-ray does not show gastric outlet obstruction. The increase in pyloric length and muscle wall thickness, are usually easily visible on ultrasound examination.

Nevertheless, ultrasound findings, at times can be ambiguous. In these cases of gastric outlet obstruction, the possibility of pylorospasm should be considered. The diagnosis of which can be confirmed by prolonged ultrasound, without any concern about ill effects of radiation.

Back To
The Neonates