Child growth variations is a common phenomenon in a child’s growth process.

The growth begins from the very moment of conception and continues till an infant attains its specific adult stature. Many inherent and external variables influence children's growth potential resulting in growth variations.

The knowledge of normal growth pattern is crucial to distinguish normal growth variations from disturbed growth process caused by the stumbling blocks in the long process of child growth.

There are many forms of child growth variations. Many of them are attributable to individual genetic predisposition and circumstantial familial patterns.

If a child's measurements fall in normal range for “weight for height”, then the child will fall under the category of "normal child growth variation".

The familial short stature simply means what the name suggests; runs in the family. Child inherits short stature representing genes from the parents.

These children have low weight and height, which follow at a lower percentile on the growth chart throughout the childhood.

Their head circumference could be large or small, but within the normal limits for the age.

Consequently, familial short stature children grow to be short adults. Their adult height corresponds to that of their parents. They are medically absolutely normal, get normal growth spurts and have normal transition through the puberty.

Note: In the percentile growth graph given below shift of the curve (in red) is associated only with growth disorders.

Any such deviation noticed on child's growth chart should arouse concern. 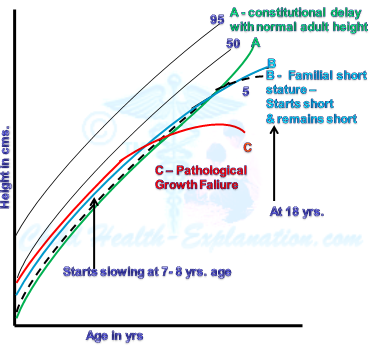 Familial disposition, often in both the parents, has been documented in this pattern of delay in growth.

A constitutional short stature child is actually a normal child, whose height is uniformly sustained at a lower percentile during early childhood.

However, they have delayed onset of puberty , and consequently, their pubertal growth spurt gets delayed; hence the name " late bloomers ".

As a result these children appear shorter and younger than their peer and have:

Constitutional short stature children often fall victim to peer pranks. This could arouse psycho social issues with some of the affected teenagers. Most of these children finally attain normal adult height.

Late bloomers should be examined and followed closely for the abnormalities of pubertal development.

If a constitutional short stature girl does not develop some secondary sex characters by the age of 14 and start menstruation latest by 16 years of age, then it is a cause for concern.

catch down growth is specifically seen in children who start off at high percentile in early infancy. It occurs because of their excellent prenatal and postnatal nurturing. They need to slow down to fall in norms of human stature.

So, in between 6 and 18 months of age these children show a fall on their percentile growth chart as child growth variations. Over a time they match their genetic programming and then they grow at this lower percentile, but along their genetic potential.

They have normal physical, psychological and behavioral development. However, a fall of more than 2 major percentiles warrants medical consultation.

Growth spurts are short periods of fast growth and are seen as:

Can coffee/caffeine intake during childhood cause stunting of growth?

Caffeine in coffee is an addictive drug. It has many undesirable effects on child health. Coffee consumption during pregnancy jeopardizes the growth and development of fetus, infants and toddlers.

However, its role in stunted growth of childhood has recently been disproved by scientific studies.

Nevertheless prolonged and excessive consumption of caffeine in chocolates, coffee, tea etc. cause many other adverse effects in children. Therefore, the subsidiary beverages that contain caffeine, such as health drinks, have been banned in many schools.

We need to be vigilant and maintain growth charts through out the childhood in order to distinguish sneaking growth disorders from normal child growth variations at the earliest. 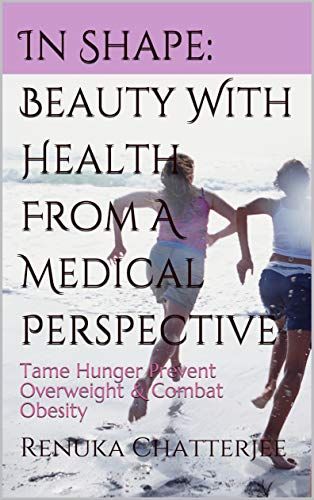