Atopic dermatitis, also known as Infantile Eczema, is characterized by itchy skin rashes that come and go. It belongs to the group of allergic-disorders that includes food allergy, asthma, and hay fever. Despite the name and the group it is assigned to, atopic dermatitis itself is not a type of allergy, nor is it necessarily associated with allergic sensitization.

Atopic eczema is primarily a disease of early childhood. Most affected children undergo spontaneous remission before teenage. However, the persistence of atopic dermatitis through the adolescence into adulthood is significant.

It is the most common noncontagious chronic inflammatory skin disease, which is widespread in all ethnic groups and in all social strata of the society. However, the prevalence of eczema in different ethnic and social groups varies.

The racial differences in the clinical presentation of the disease are attributed to genetically determined differences in the immune responses. Whereas, the high prevalence of eczema among children from more advantaged homes is believed to be due to increased chances of exposure of their babies to the offending allergens in early infancy. 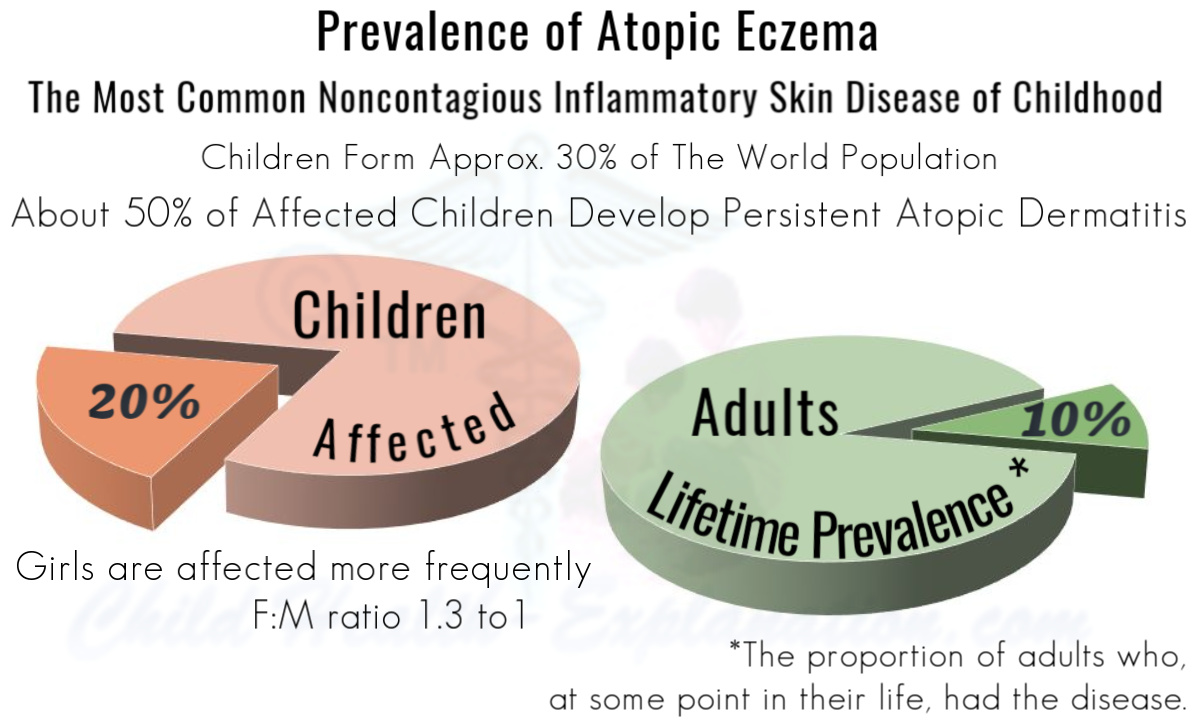 Most frequently infantile eczema affects the babies with dry skin, and those who are born in winter or early fall. 45% of all cases develop an itchy red skin rash within the first 6 months and 60% before their first birthday. This is the period when babies receive vaccinations. Hence the dry, itchy red rash on the face, neck, chest, or arms, is looked upon as an allergic reaction to the vaccine. But it has been proved beyond doubt that vaccinations do not cause chronic atopic diseases!

Infantile eczema, like other allergic disorders, runs in families. A positive family history of atopy has been noted in almost 70 percent of the cases. The risk in an infant doubles even if one of the parents is atopic. Whereas, if both the parents are predisposed to allergic diseases, the risk of atopic disease in their offspring increases 3-5 folds.

1 in 3 babies. born in a family that is prone to atopic diseases, manifests atopic eczema before 3 months of age, but never in the first month of life.

The role of immune system

Disturbed regulation of the immune system plays a significant role in the development of eczema, an itchy inflammation of the skin. The latest research shows that there are a variety of inborn defects in the innate immune system that collectively affect the development, progression, and severity of atopic dermatitis. These defects not only make an infant more susceptible to normal flora of the skin and mucous membrane, but also promote inflammation and thereby aggravate or even induce the development of eczema.

The skin rash in atopic eczema 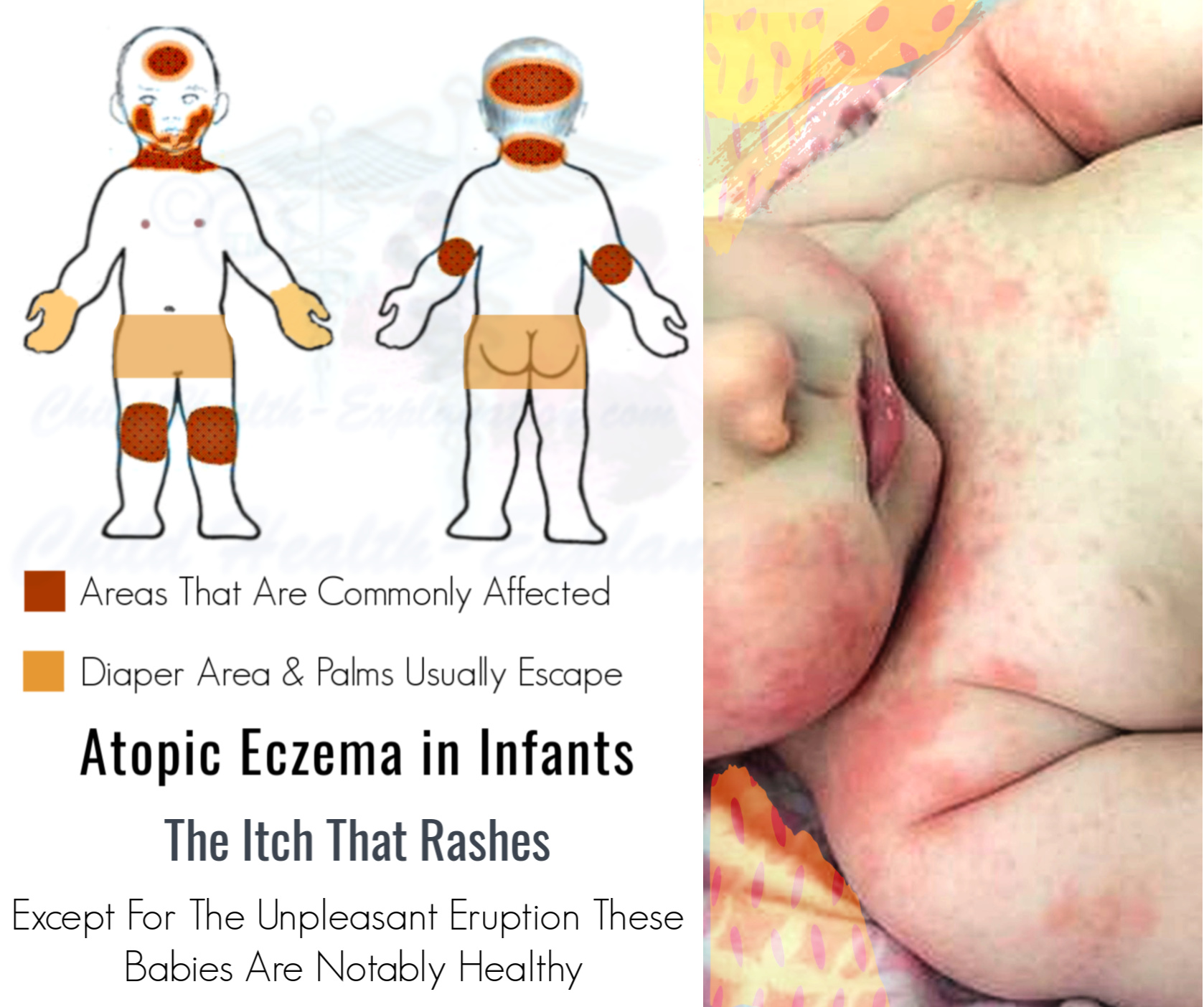 The Rash Of Atopic Dermatitis:
The Most Common Eczema In Infants & Children

The skin rash of atopic dermatitis is "the itch that rashes". It is characterized by a reddish eruptions with uncertain margins. The eczematous skin feels swollen, flushed, and congested. Tiny fluid-filled blebs are often seen on the surface, which ooze fluid in the initial stages and form a crust as time passes. But it is never painful like impetigo, the inflammation of the skin, overlying eczema, often by bacteria from normal skin flora. 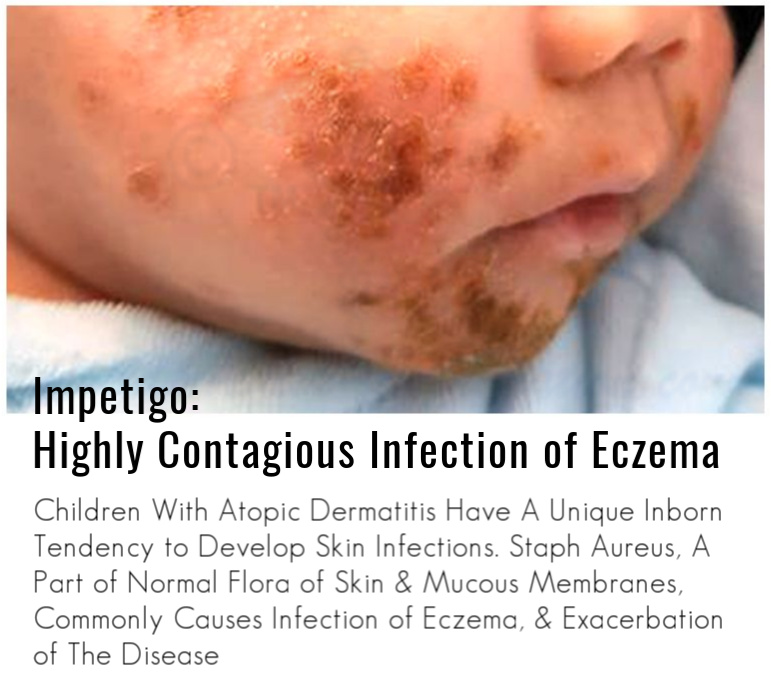 Around 35 percent of children, who develop atopic eczema before 2 years of age, experience the atopic march. Atopic march denotes sequential progression from atopic dermatitis to other atopic diseases like allergic asthma and hay fever.

Other risk factors that lead atopic dermatitis through the atopic march and the development of asthma are severe form of the disease, male gender, parental history of asthma, and early and multiple sensitization to allergens in the environment. 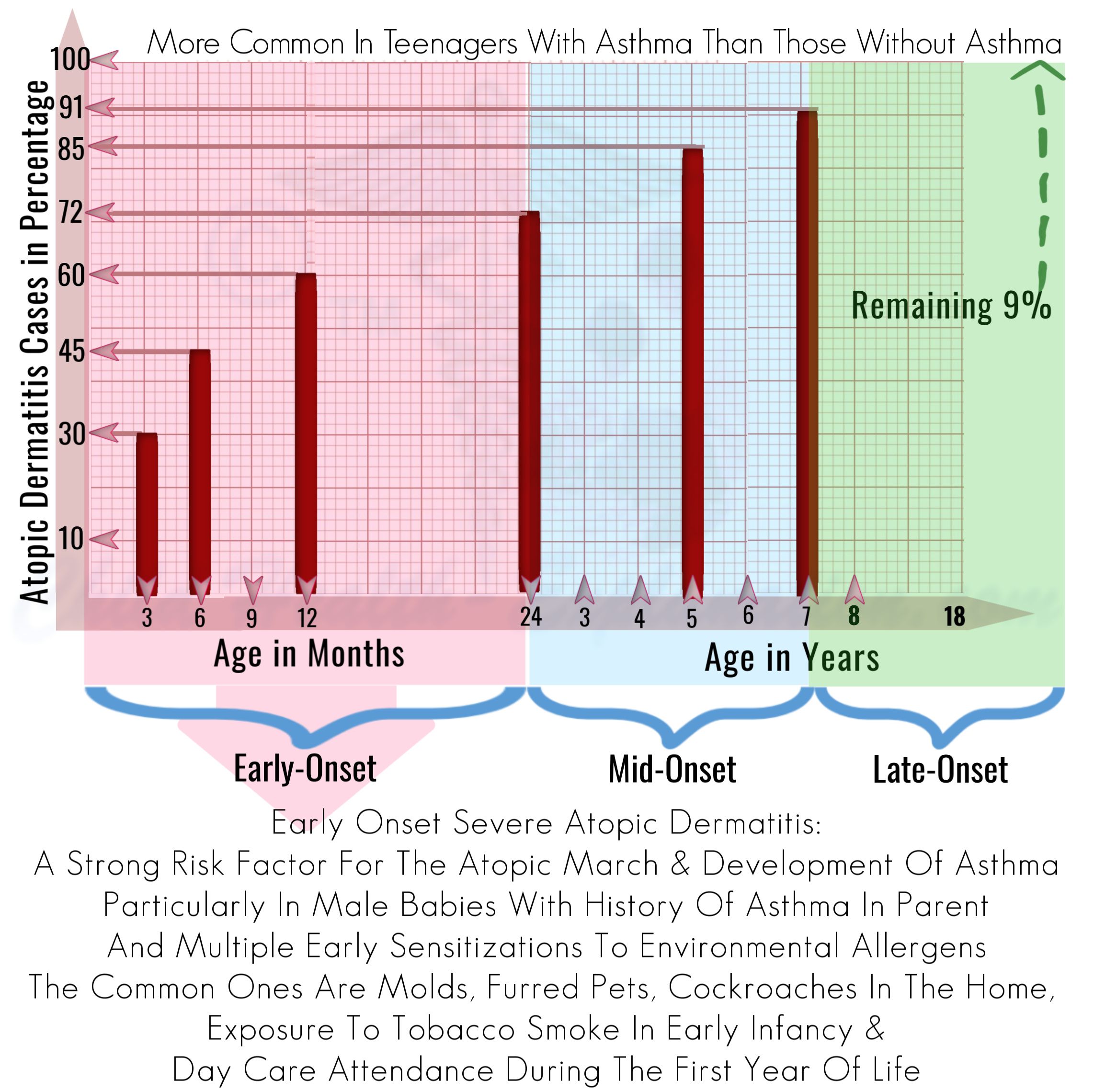 Incidence Of Atopic Dermatitis
Primarily A Disease Of Early Childhood

Familial predisposition to atopic diseases makes children prone to allergic sensitization to the environmental allergens, particularly to those in the food and air. To be able to sensitize an individual's immune system, these antigens have to first go past the protective barrier of the skin and mucous membrane. 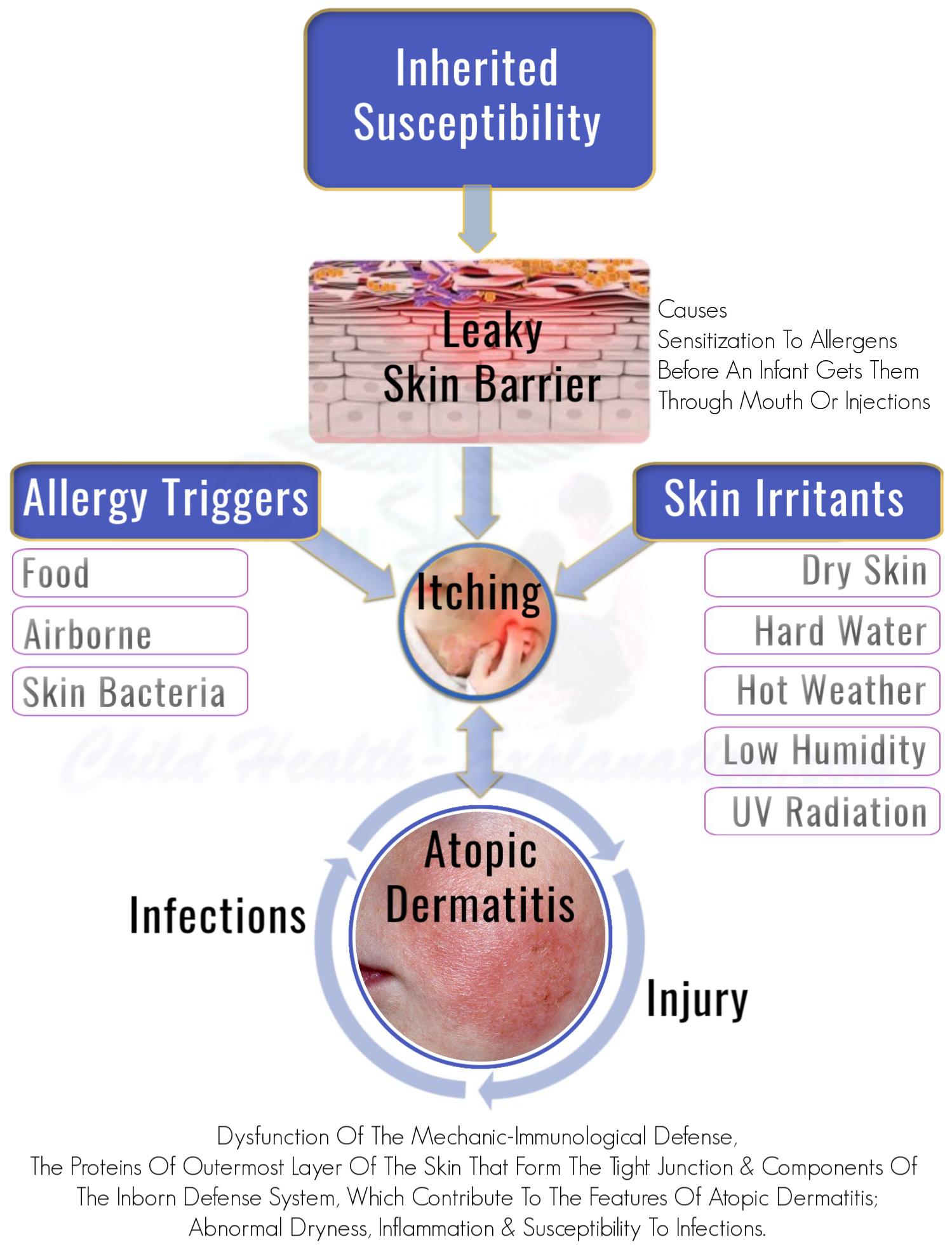 Pathogenesis of Atopic Dermatitis:
Mechanism of Development of The Disease

Infants with clinical atopic eczema within the first two years of life generally do not have high IgE levels that represent the presence of an allergy. This should be able to undo parents' concern that vaccines cause atopic diseases.

Conversely, some studies have confirmed that vaccinated children have a moderately reduced rate of atopic diseases.

No, they don’t!
Vaccines do not cause or aggravate atopic eczema.

Many parents doubt vaccines' safety. They fear that vaccines given from early infancy, disturb baby’s natural defenses against infections of childhood, and make them prone to atopic diseases. Several mechanisms are put forward to back the concern.

Extensive research done on the subject does not support the hypothesis that vaccines cause atopic dermatitis or asthma. On the contrary, some vaccines even help to prevent autoimmune diseases that could surface after natural infections with wild bacteria or viruses.

Back To
Allergies in Children