Air pollution imposes recognizable threat to children’s health. Large quantities of thousands of toxins are being realized in the environment on a daily basis. Concentrations of the pollutants in ambient air are well above WHO guidelines for safe air quality. The scientific understanding of the effects of the toxic air contaminants on child health has augmented over last twenty years.

What are air pollutants?

There are numerous toxins floating in the air we breathe, which are regularly being produced by motor vehicles, industrial facilities, residential wood combustion, agricultural burning, and many other sources.

Moreover, another 50,000 chemicals, which are being commercially used, can find their way into ambient air. They either remain airborne or react in the atmosphere to produce other harmful substances. Some of these chemicals form deposits on the soil and water and through the food chain they affect children.

“Toxic air contaminants” refer to 188 pollutants and chemical groups that impose serious child health issues. However, till date the data on potential toxicity of air pollutants on children is limited to only the few common ones.

Children accumulate high concentration of toxins per unit body weight from the ambient air. This is because, their body systems are yet in the process of development.

Besides, exposure to ambient air toxins is not a one-day affair. Children have an active outdoor life. They, therefore, get exposed to air pollutants for long hours day after day. Consequently, the injury incurred has a long-lasting effect on their health.

Gravity of the threat to child health

Outdoor and indoor air pollution is a growing menace to children’s well being.

According to WHO: Global Health Risks, “the overall mortality and burden of disease attributable to selected major indoor air pollution alone is about 2.7 percent of the total global burden of the diseases”.

The ill effects of air pollution on developing lungs lead to long term compromise in lung functions. The genetic component finally determines the severity of air pollutant induced lung injury. The ability to heal back is also by child's genetic make up and persistence of offending agents. 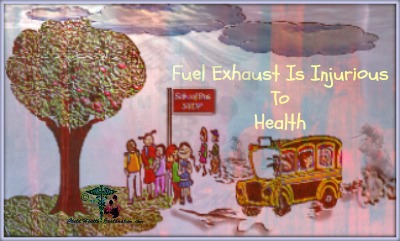 The new cases of asthma are reported to occur most frequently among children living in heavy traffic zones, which have high concentration of fuel exhaust.

Studies have shown that children who have high exercise triggered asthmatic episodes are also the ones exposed to high ozone concentration generated as a result of fuel exhausts.

Acute respiratory infections are the major cause of deaths during infancy and in children under 5 years of age. Industrial sources of particulate pollutants are more frequently associated with mortality.

Benzene fumes from spills and incomplete combustion are known to cause myeloid leukemia in adults. The effects of air pollution specifically on childhood cancers were first evaluated in 1989 in Denver in the U.S. The study concluded a significantly increased risk of cancer among children living in high traffic density zone.

Prior to this, many studies had indicated carcinogenic effect of traffic related air pollution, but all these were either from animal experiments or from epidemiological data on adults.

However, now there are a number of epidemiological studies specifically on childhood cancer that have directed the hypothesis that “air pollution from traffic causes cancer, particularly leukemia in children”

In age group of 0-14 years, 2-3 children in a school of 20 thousand are affected by childhood cancer. Leukemia is the most common childhood malignancy and accounts for almost one third of all malignancies in the entire population.

Heavy metals: lead, mercury, manganese, and poly aromatic hydrocarbons (PAHs) and dioxins can have negative neurological effects on children. These agents have the potential to trigger behavioral problems and learning difficulties of childhood.

Developing brain is particularly vulnerable target for any form of insults and the brain development continues trough out childhood.

Some of these chemicals can seep through placenta and the blood brain barrier. In the brain, they hamper the equilibrium of neurotransmitters, proliferation of neurons and glial cells, neuronal differentiation and myelinization.

Other ill effects of air pollution on child health

What can we do for safe air?

Implementing the commands for maintenance of safe air is beyond any individual person or governmental body. We all unitedly have to work to make the air safe for our children.

Prevention is the only solution and it needs mass awareness of the increased harmful effects of the floating environmental toxins on child health. Then comes, how to prevent air pollution?

Given below are few simple solutions for this complicated problem.

Scroll through the right column for more on pollution hazards